In producing a circuit board, several concerns alarm every designer, one of which is the Annular Ring. Although it may sound simple to integrate on the board, it requires precision to prevent breakouts.

Consequently, designers should be careful in determining the ring’s size, dimensions, and placement to prevent the board from malfunctioning. In this article, we’ll dig deep into an Annular Ring PCB.

Since an Annular Ring PCB is a crucial component of a PCB, it necessitates appropriate measurements to avoid mistakes while designing one. If you’re still wondering about the significance of it in a board, keep on reading until the end; we guarantee one will gain from this information.

As a manufacturer with over twelve years of experience in the industry, we’re capable of providing all the necessary knowledge about Annular Ring PCB, its structure, size calculation, and issues. 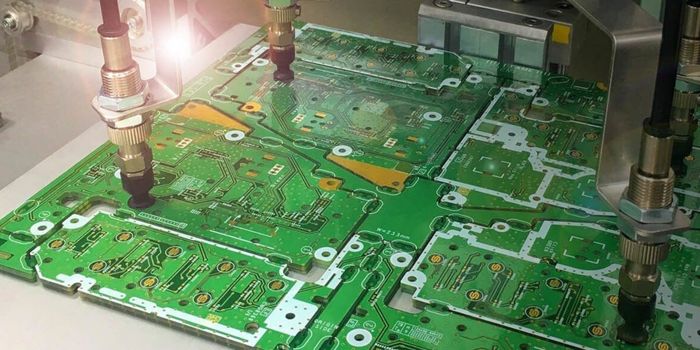 What is an Annular Ring in PCB?

To put it simply, an Annular Ring PCB is a pad that wraps around a hole or via; specifically, and it is a copper-plated via. Its name derives from the mathematical term “annulus,” which means the area within two overlapping rings. Generally, it aims to ensure a flawless linkage between the traces of copper and the vias. Basically, a via acts as a connector or node that links to various layers.

In terms of diameter, the manufacturer’s capability, the hole’s nature, and if they are plated will determine the appropriate size of the ring. Overall, an Annular Ring is an anchor to the circuit since it is primarily responsible for the electronic component linkage. 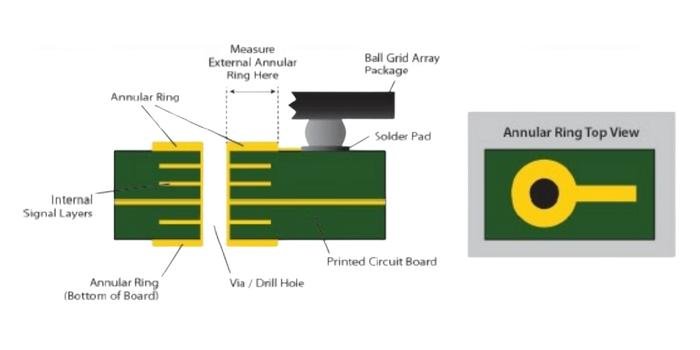 What is an Annular Ring in PCB?

Construction and Structure of an Annular Ring in PCB

To begin, constructing an Annular Ring in a PCB is relatively simple. If there’s a need for a trace connection, it is inevitable to integrate copper pads via them to ensure the link will occur. During the incorporation of vias, an external ring will cover the outsides; that’s when the Annular Ring will rise.

As for its structure, it can vary depending on the drilled hole. In terms of preventing the board from breakouts, we suggest going for a wider Annular Ring since it can safeguard the board against such a situation. In cases wherein one decides to go for a multilayer board, we recommend reviewing the linkages twice to ensure that its copper conductors are flawlessly connected.

Calculation of its Annular Size: Why Does it Matter?

As mentioned, the dimensions of the ring will dictate its conductivity; hence, it is highly significant in a board. Its size should depend on and be relevant to its space to ensure its success. However, it is necessary to evaluate if the size and distance can strengthen and improve the connection to a greater extent. If not correctly calculated, it can pose risks, including tangency, undesired ring, and breakout. All of these potential issues may arise because of its design, which has insufficient width for the ring. In order to prevent this from happening, we can utilize the formula to check whether its size is suitable for the specified width of the vias. 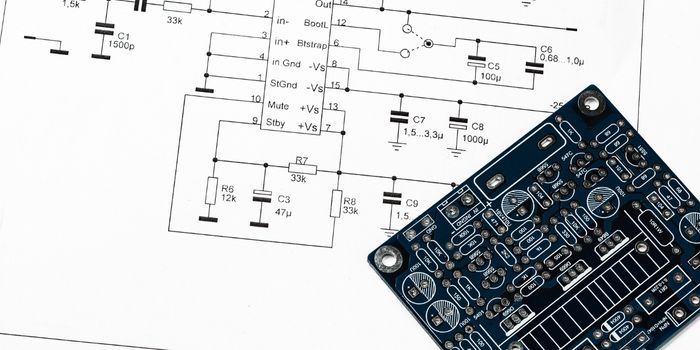 Calculation of its Annular Size: Why Does it Matter?

Typically, many people think that a Through-Hole is associated with a mounting technique in a circuit board, which is a fact. There will be drilled holes, and then the electronic components will be integrated through that spot. In a broader manner, it can be considered a via; however, with one note, not every via belongs to this specific mounting technique. Its process is simple to create conductivity; the electronic components have their leads attached to them, then inserted through their dedicated drilled spot, and solder into the copper pad.

Whereas, Annular Ring in PCB links the via into the copper clad to create conductivity. Another difference is that, unlike a Through-Hole, an Annular Ring is not a mounting method. 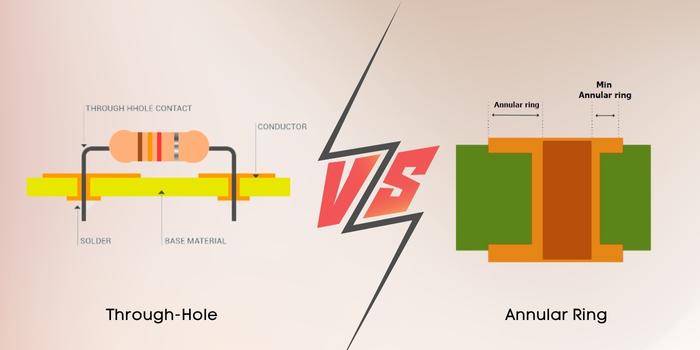 It was greatly emphasized that Annular Rings could be complex to integrate on boards; thus, it is prone to countless issues if performed incorrectly. In this section, we will dissect the various concerns in Annular Rings.

One of the causes of Tangency is an insufficient dimension of the Annular Ring to fit inside the hole. Apart from that, its principal cause would be if the hole off-center was unintentionally holed since it could nudge the copper pad edges. This leads to a connection cut and could raise a higher risk if left untreated.

As its name indicates, Undesired Annular Rings occur whenever the copper pad’s size doesn’t match the ring. Let’s say the buffer is small, and the ring is too large. It raises concerns about the board’s functionality. The effective way to prevent this occurrence is to test out its prototype during the designing and fabrication phase of the board.

To put it simply, Breakout is the brutal way of tangency; it occurs whenever the hole exceeds the pad and the ring. In simple terms, it is when the spot breaks out to the copper pad and the annular ring. One of the common causes of this happening is the mismatch of layers that leads to misalignment. Suppose the layers are misaligned, and so its drilled holes. In order to prevent this from happening, we suggest accurately measuring the appropriate Annular Ring into the hole.

Generally, rupture can be described through its definition; whenever the board encounters environmental and mechanical stress that could lead to cracks and breakage, it can rupture. Its solution is simple; we suggest going for a manufacturer that has been in the industry for years already since they already know their way through the production, like PCBTok. Furthermore, it can be solved through first-class raw materials and continuous maintenance.

What is Teardrop Annular Ring?

As its name suggests, a Teardrop Annular Ring is shaped like a teardrop. It still has the same function as the standard Annular Ring. However, this ring has way more strength since it possesses extra copper to link with the external edges. It is commonly used if there’s an issue with the drilled hole, like if the hole was extended to an extent since it can put the copper at risk or fully eradicate it from the board.

Below are the capabilities of an Annular Ring: 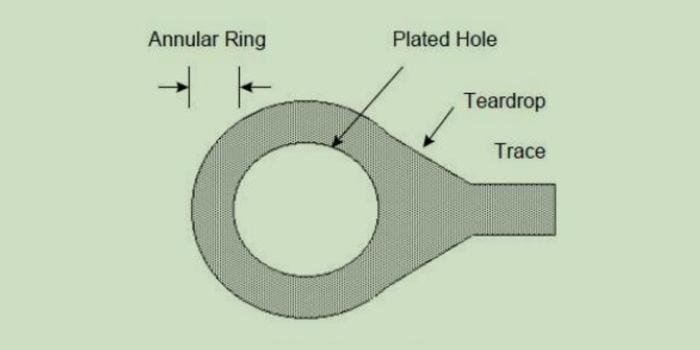 What is Teardrop Annular Ring?

In some cases, overlapping edges to a pad can occur; it can happen if the designer decides to go for the most miniature pad and hole. Thus, leading to a breakout if performed excessively. An open circuit could potentially happen during this situation, leading to cracking because the hole extends toward the trace. As a result, there will be a lowered reliability and yield, increasing the production cost. However, this issue can be solved by using a Teardrop Annular Ring.

In line with this, we recommend going for an experienced manufacturer since the teardrop design can be complicated. It should be incorporated and performed without being seen by the naked eye.

Per the standard guidelines, the allowable misalignment in PTH and NPTH is approximately 90 degrees, and its junction shouldn’t be decreased, not to overlap twenty percent.

To wrap things up, the Annular Ring in PCB is another essential component in the board since they are practically responsible for ensuring an error-free linkage among different nodes on the surface.

Sincerely, PCBTok’s goal is to aid readers in comprehending the Annular Ring PCB and assisting them in choosing suitable dimensions for their needs.

We highly suggest going for a manufacturer with extensive knowledge in the field, like PCBTok, to ensure that one will get their desired outcome flawlessly. Our Annular Ring will be produced using cutting-edge methods and put together with high-quality components so that we can provide our clients.

If you have any inquiries you may have, kindly send us your questions; we’ll be happy to assist you. Obtain your Annular Ring in PCB with PCBTok today!